Home » Research » ACME: a search for the electric dipole moment (EDM) of the electron

ACME: a search for the electric dipole moment (EDM) of the electron

A permanent electric dipole moment (EDM) of the electron along its spin axis would violate parity and time reversal symmetries, and is of considerable interest in elementary particle physics. Because of the CPT theorem, which states that the combined symmetry operations of parity, time, and charge conjugation must be conserved in any Lorentz-invariant theory, violation of time symmetry implies violation of CP symmetry. The CP operator is effectively the operator that translates particles into anti-particles and vice versa. Therefore, any violation of CP symmetry would imply a difference in behavior of particles vs. antiparticles. Such a mismatch in behavior is required to explain the matter/anti-matter asymmetry of the universe.
The standard model of particle physics contains CP symmetry violation, but not enough to explain the current matter/anti-matter asymmetry of the universe. Moreover, the level of CP violation is so small that the standard model prediction for the electron EDM, de<10-39 e·cm, is far too tiny to be detected by current methods. However, many favored extensions of the standard model predict a much larger value of de; these predictions are very often large enough to be within reach of the next generation of experiments. With any improvements in sensitivity, either evidence of new physics beyond the standard model may be discovered, or some of these models may be excluded.
The ACME Collaboration, which includes the DeMille group at Yale and the Doyle and Gabrielse groups at Harvard, has set the best experimental limit on the electron EDM to date: de<9.3×10-29 e·cm.  In the ACME experiment,  electrons are embedded inside the polar molecule ThO. Here, in the metastable 3Δ1 excited state they experience a huge effective intramolecular electric field Eeff, ~ 80 GV/cm. Our experiment takes advantage of several unique properties of this particular state of ThO, including closely spaced levels of opposite parity, long coherence times, and suitability for use in a cryogenic molecular beam that enables high counting rates. Over the past few years, the experiment has been upgraded to achieve several hundred times higher signal size, allowing the shot-noise limited sensitivity of the EDM measurement to be improved by more than an order of magnitude in the next measurement.
In the experiment, the ThO molecules are produced by ablating a ceramic target with a high-power pulsed laser. The molecules are then entrained in the flow of a cryogenic gas, producing a slow molecular beam and cooling the rotational motion of the molecules. Parallel electric and magnetic fields are applied to the molecules. The closely-spaced opposite parity levels are split by the Stark effect and form two sets of states – one with the dipole moment of the molecule aligned with the electric field and the other anti-aligned. In the ongoing version of the experiment, one molecular orientation is populated in the 3Δ1 electronic state by two lasers in a coherent state preparation technique known as STIRAP. The polarization of the STIRAP lasers aligns the electron spins, which then precess around the magnetic field. We excite the electrons in orthogonal spin alignment directions by using orthogonal laser polarizations, and we observe the relative fluorescence intensity from each configuration to infer the final spin precession angle. The electron’s EDM will modulate the magnetic field-induced precession in a way that reverses when the experiment is repeated for molecules with the opposite molecular orientation. By looking at the difference of the precession angles between the two sets of states, the EDM can be measured.
We have demonstrated our target statistical sensitivity for a more precise measurement of the electron EDM and are beginning to investigate possible sources of systematic errors. After thoroughly characterizing any systematics that might be discovered, we expect to publish a new result with more than an order of magnitude better sensitivity than the previous limit we set (in 2014). However, that will not be the end of the search for the electron EDM in the DeMille group. Work on third-generation improvements to the ACME experiment is already underway. 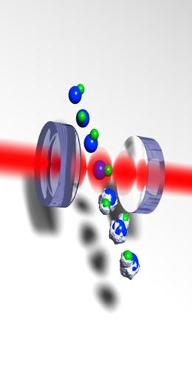